Last weekend we threw a birthday party for my little girl who will be six later this week. This was the first time we had organised a party for my daughter and her friends as we had previously managed to get away with family parties and days out to celebrate a birthday instead. This year however, after attending her classmates' parties throughout the past year, she was determined to have one of her own and we agreed as we didn't want her to miss out and realised how important it was to her. My daughter is not the loudest in her class so only wanted to invite a few of her friends to celebrate with her and enjoy some party games and cake. We decided to have the party in the cafe at a local dairy farm, specifically in a little area of the cafe overlooking the milking parlour and some newborn calves for the kids to coo over.

As I've never thrown a child's birthday party before, I was worried whether there would be enough to entertain the kids - however I soon realised that a party just needs some food, birthday cake, music and the old favourites such as pin the tail on the donkey, pass the parcel and musical statues or bumps (or both!!) to get the party going and the kids excited and dancing around the place. As there were only seven children in total, we had a large table which we decorated with a unicorn tablecloth and napkins and laid the food out in the middle ready for lunch. To get the kids in the mood I also put out the Djeco Les Loup'Foques - 8 Domino Masks which were instantly grabbed and put on as each guest arrived and they chased each other around the room laughing away. Once everyone had arrived we started off with Hi Han! - a lovely colourful version by Djeco of pin the tail on the donkey which had the girls quickly queuing up to have their turn and was a great success.

After that the kids were just running around playing tag amongst themselves and burning off a bit of energy. We thought that this was an ideal time to have a spot of lunch to give them some more energy for more games. Once lunch was finished we decided to have a calm activity and brought out the Melissa & Doug Scratch Art bookmarks to give the girls the chance to design their own rainbow bookmarks that they could take home with them after the party. Again they were a big hit - I underestimated how popular they would be and the whole pack was soon used up and they were proudly showing their artwork to their parents. Next we thought it was time for the old favourite of musical statues - we had created a playlist of my little girl's favourite tracks and the dancing was very enthusiastic and energetic! The moves being displayed were very impressive and they were all very good at keeping very still when the music stopped so it took a while to find the winner! 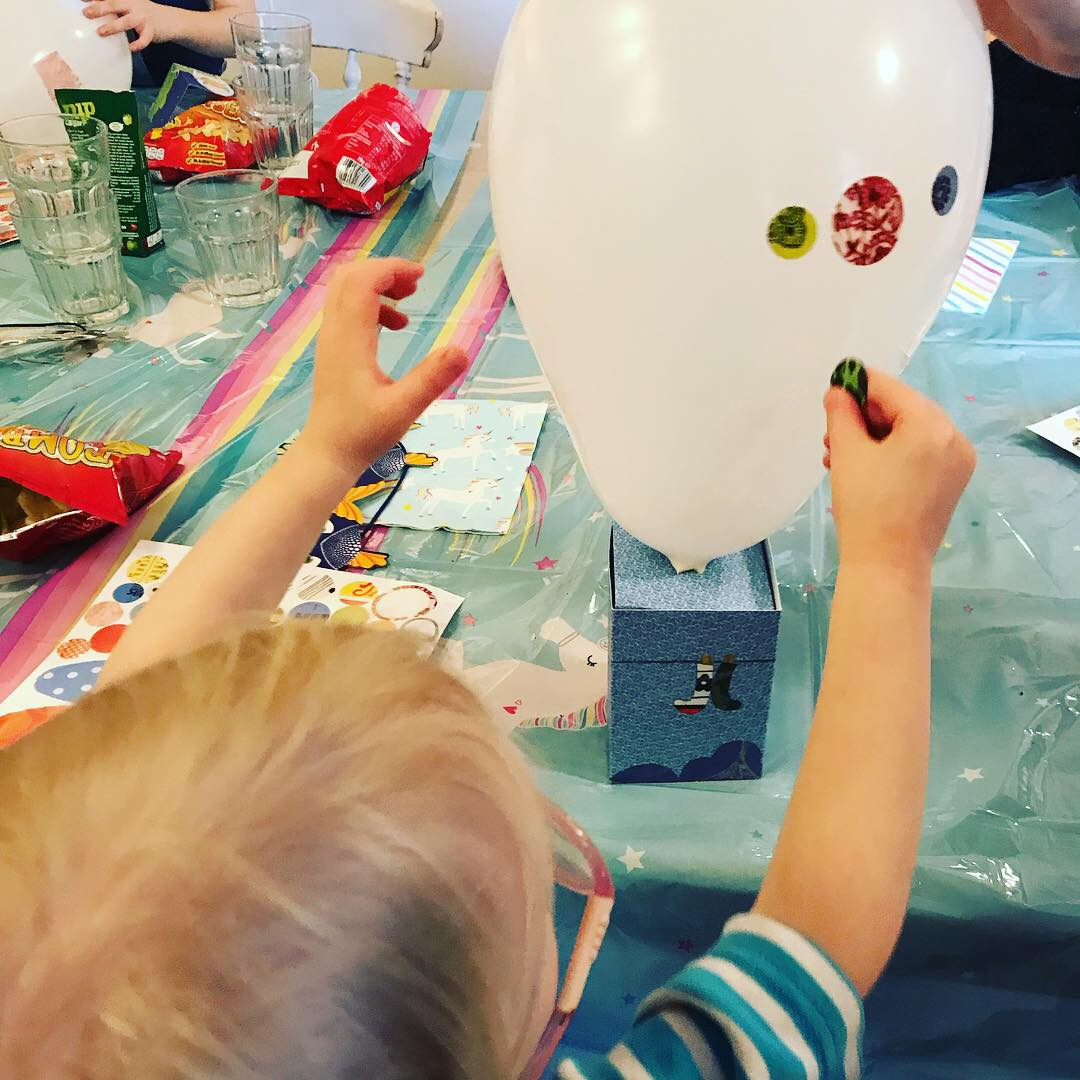 After all that dancing we brought out the Djeco Animo Ballon - a lovely activity where the girls had lots fun decorating their own balloons with stickers to make crazy animals that again they could take home with them as a souvenir of the party. They all took creating their creatures very seriously and were very inventive - I was really impressed how well the activity was received. Once they had finished they were able to look over into the milking parlour of the farm and watch the cows being milked - the littlest girls found this really fascinating and also couldn't keep away from gazing at the young calves in the enclosure next door. Finally the time arrived for birthday cake which was happily scoffed by all and they also had a little tour of the calves' enclosure to see them up close which is not normally possible. The party was happily rounded off by some running around in the small playground outside afterwards, playing yet more games of tag and going down the slide. The girls had so much fun that we didn't have time for the other game I had planned Pouet Pouet!, a fun game of shouts and mimes nor did we have time to get the Unicorn Tattoos by Djeco  out - these will have to wait for our family party instead next weekend - my girls think they will be great for their grandma!

All in all I am very pleased with how the party went and more importantly so was my little girl who had a great time with her mates. Organising a party no matter how big or small is always daunting but if you have the basics of food, cake, music, party games and crafts it will always go well!! Thankfully my youngest's birthday isn't until July so I have a bit of a break until the next one!

← Previous Next →
Related Posts
We think you'll like these too
Categories